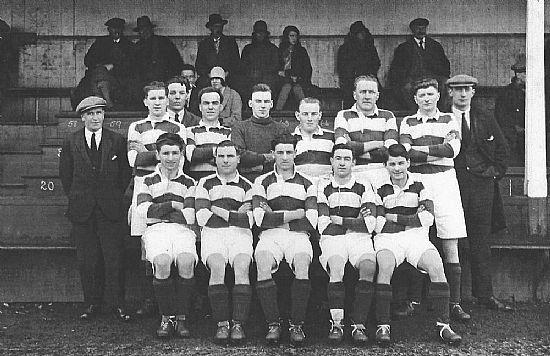 Entering the Highland League in 1929, Ross County Football Club established a ground at Victoria Park, Dingwall and a club badge incorporating the Caberfeidh or Stag's Head from the regimental badge of the Seaforth Highlanders.

In their first season in the Highland League, Ross County lifted the North of Scotland Cup and over the years gained a reputation for playing attractive and high quality football as they lifted several further trophies both before and after the Second World War.

It was not until Season 1966/67 that the club succeeded in winning the Highland League Championship. The team that achieved this did so with a squad comprised largely of local boys: Sandy Wallace, Jimmy Hosie, Don MacMillan, Jackie Lornie et al.

The next League success was not to come until 1990/91, but the team then successfully repeated the trick the following season. It was these back-to-back successes which gave the then club Chairman, Hector MacLennan, the confidence to apply for membership of the Scottish Football League when restructuring saw a requirement for new teams to be admitted for the 1994/95 season.

Following a carefully orchestrated campaign, Hector travelled down to make his presentation to the League accompanied by Club Secretary, Donnie MacBean and thanks to the skills of Hector and Donnie - as well as the countless people who had worked behind the scenes to prepare the bid - Ross County succeeded in gaining admission to the Third Division.

The club then began a programme of building both on and off the park and the strengthened team rose to the new challenges presented by the League and in Season 1998-99 won the Third Division Championship. The following season County won promotion to the First Division.

A season-long return to the Second Division soon after was in many ways the first step in building and renewing foundations which have subsequently taken the Club to the greatest successes in its history. It would not be long before the club were back up in the First Division, however, and under new manager, Derek Adams, County earned their place in the 2010 Scottish Cup Final after a memorable cup run that had seen the club defeat Celtic at the national stadium in the Semi Final.

Defeat to Dundee United followed in the final but in the 2011/12 the club won the First Division - and promotion to the SPL - by a record breaking margin. Ross County also became the first club in Scotland to secure four separate championship titles: Highland League, Third, Second and First Division.

The First Division Champions unfurled the flag on Saturday the 4th of August 2012 ahead of the Club's debut match in the SPL. A top six finish in the league would follow that year but by September 2014 - and with new manager, Jim McIntyre hired to lead County out of the relegation zone - a new era was ushered in. The ‘great escape’ would be achieved in the 2014/5 season and this was followed up with the club registering a top six finish in the 2015/16 season and making history by lifting their first ever major trophy. The 2-1 victory over Hibernian in the League Cup will live long in the memory of Staggies everywhere as will the semi final defeat of Celtic.

Season 2017/18 saw a downturn in fortunes and ultimately the club suffered heart-breaking relegation from the Scottish Premiership. With only a handful of fixtures left the reigns were handed to Stuart Kettlewell & Steven Ferguson, two legends of the club who only shortly before had lifted the Development League title with the clubs Development Squad. Kettlewell & Ferguson made an instant impact and in season 2018/19 took the Scottish Championship by storm eventually winning the division with a 6 point margin. This ensured that Premiership Football would return to the Global Energy Stadium in season 2019/2020. During that campaign, the world would be hit with the COVID-19 pandemic and the Staggies would finish 10th in the curtailed season again ensuring Premiership football for season 2020/21.

During summer 2020, Co-Manager Steven Ferguson would be given the role of Chief Executive Officer of the football club with Stuart Kettlewell taking over as sole Manager.