Ross County were defeated 2-1 by Hibernian at the Global Energy Stadium this afternoon.

County took the lead through Billy McKay, but another disputable penalty went against the home side and Martin Boyle levelled the match from the spot.

Kevin Nisbet then tapped in the winner for the Edinburgh side to grab his first goal since early January.

After just 4 minutes, last week’s hero, Leo Hjelde, nearly gifted the opposition an opener. The young full back’s pass back was too short for Ross Laidlaw and was intercepted by Martin Boyle. Boyle squared the ball for Chris Cadden after rounding Laidlaw, but he spooned his effort well over the crossbar.

With a glorious opportunity in the opening 5 minutes, the remainder of the match was forecasted to be chance-laden. However, Chris Cadden’s miscued effort turned out to be the only notable sight of goal in the first half.

Hibernian had the majority of possession, but County’s resolute back 5 were doing well to nullify the threat of Martin Boyle and Christian Doidge. The Staggies failed to conjure up any meaningful possession but were battling well to limit the Hibees to hopeful balls in behind in search of Martin Boyle.

John Hughes would have been satisfied to enter the break on level terms, but his side were certainly not at their fluent best in the opening half.

Football really is a game of two halves and this match was a shining example of that. No, this is not a reference to the tumultuous second half that played host to 3 goals and a heap of controversy, but an observation of the dramatic change in weather that altered the mood of the game. The sides enjoyed spells of sunshine in the first half before being greeted by torrential rain, gusty winds and sporadic hail as they emerged for the second half, perhaps a symbol of the chaos that would ensue.

5 minutes into the second half, Ross County found the lead through the in-form Billy McKay! The instinctive poacher latched onto Jordan White’s flicked header after the towering striker met Jordan Tillson’s first time deep cross. McKay converted from 6 yards to clinch his 3rd goal in 2 games and 4th goal in just 3 starts under John Hughes.

Immediately from kick-off, County’s lead was cancelled out after they fell victim to yet another dubious penalty awarded to their opposition. Josh Doig scuffed a shot inside the box and the ball landed at the feet of Alex Iacovitti who done nothing but simply make a slight movement towards the ball. However, Martin Boyle came from behind the defender and wrapped his foot around the legs of Iacovitti before tumbling to the floor in an inventive, but equally as questionable, appeal for a penalty kick. John Beaton pointed to the spot before the striker battered home the resulting penalty beyond Ross Laidlaw.

In the 56th minute, County looked destined to undo the injustice and regain their lead. Keith Watson thundered a bouncing volley towards Marciano’s goal from a deep free kick but the Israeli international was able to successfully beat the ball away. Jordan White connected with the rebound, but his left footed reflex effort fell into the arms of Marciano to complete the double save.

2 minutes later, Martin Boyle was involved in controversy again as the County players bellowed for his dismissal. The forward had previously been booked for a rash challenge on Leo Hjelde and had attempted to deceive John Beaton again as he threw himself to the floor in the penalty area under no contact from any Ross County defender.

However, Boyle survived punishment for this and played an instrumental role in Hibs finding the lead. He missed a glaring opportunity on the hour mark when Ross Laidlaw saved his shot from a one-on-one before the keeper was required again to keep out a long-range effort from Alex Gogic.

Finally, in the third phase of this attack, Hibs had the ball in the net and took the lead. Martin Boyle received the ball in the box before finding Paul Hanlon to the left of the box who then slid the ball across the box to Kevin Nisbet for a tap in.

14 minutes before full time, Jordan White was denied the equaliser by the woodwork. His looping header from Leo Hjelde’s deep free kick clipped the outside of the post as the striker looked certain to make amends for his previous miss.

The Staggies piled on a mountain of pressure as the game drew to a close but they could not open up Jack Ross’s stubborn defence.

On the 5th anniversary of County’s famous 2-1 victory over Hibs to clinch the 2016 League Cup, the visitors were able to perform a reversal of the score line to take 3 points back to Edinburgh.

With County and Accies both losing this afternoon, the bottom 6 remains unmoved. The Staggies are still in 10th position, 4 clear of Kilmarnock in 12th and 3 clear of Hamilton in 11th. 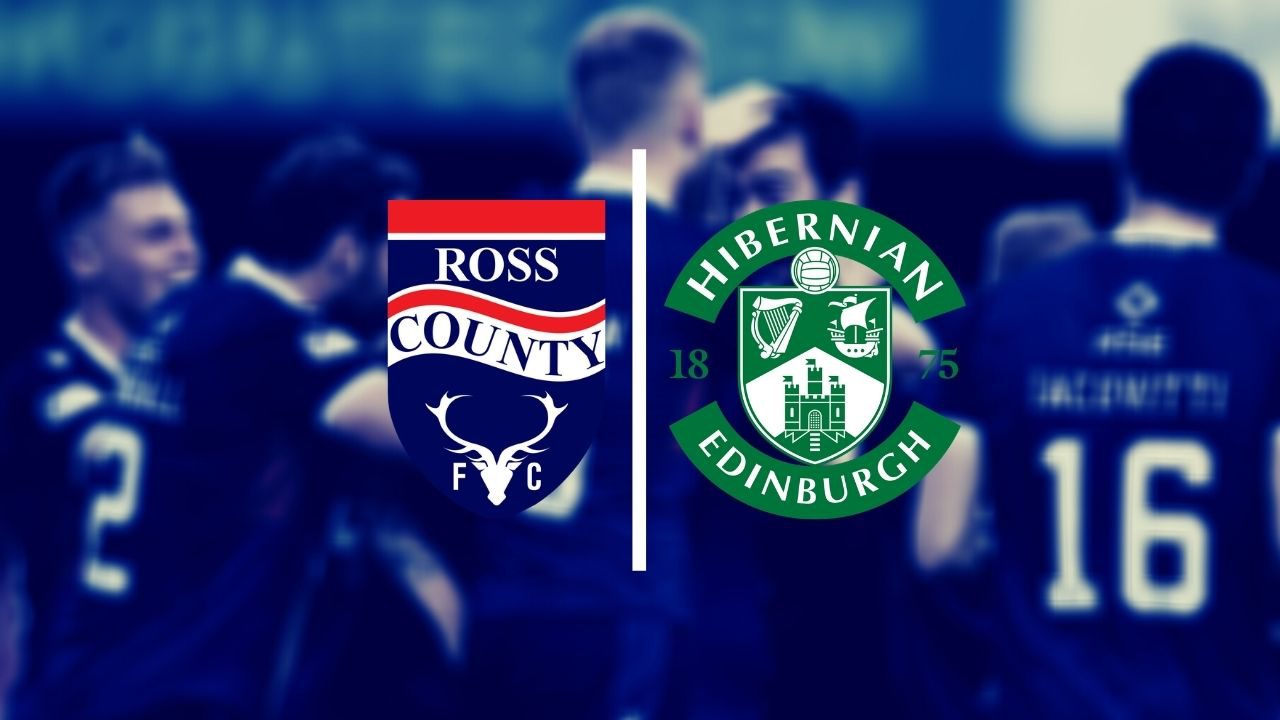